From our U.S. Marines sharing nudes of their female colleagues, to the leader of our land mocking journalists and throwing insults on social media, we are witnessing a time when some adults are questionable role-models and civility is dipping both offline and especially online.

Shaming the defenseless is despicable.

In Jacksonville, Florida, two Navy hospital corpsmen allegedly posted a video and photos of newborns to Snapchat, including a picture showing one of them flipping the middle finger with the caption, “How I currently feel about these mini Satans.” 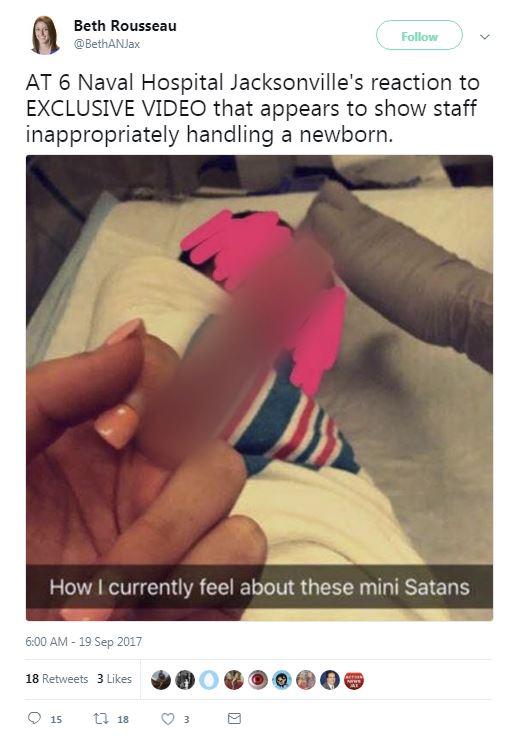 It seems these Navy corpsmen have a short memory from the Dani Mathers case. Although the images are no longer on Snapchat, they were quickly shared on Facebook and the outrage spread on social media.

Both these corpsmen have been removed from their jobs.

“I can’t believe they fired me!”

Like many workplaces, the Navy has social media policies in place.

Vice Adm. C. Forrest Faison III, the surgeon general of the Navy ordered a stand down for naval medical personnel to review policies and medical oaths and pledges to treat patients. This includes social media guidelines.

“Unprofessional and inappropriate social media behavior is inconsistent with both our core values of honor, courage and commitment as well as our medical ethics, violating the oaths we took for our profession and office,” said Faison.

It may not be new, but we will never get used to it? It wasn’t long ago when the secret Facebook group popped up in South Florida dedicated to bashing ugly babies.

Even celebrity babies are not immune from coming under attack. After Beyoncé and her four-year old daughter, Blue Ivy, walked the red carpet at the 2016 MTV Video Music Awards, Twitter users trashed the child’s looks.

Why are people mean?

Technology gives people, especially bullies, a larger audience. People that are usually a weak person in real life, can become bold online. It’s the lack of eye to eye contact, you’ll never have to face them — or confront the harm you are inflicting upon them.

We are also facing the lack of gatekeepers as well as consequences, however as more and more cases like the Navy corpsmen and other headlines stay in the media, people will start realizing that their online behavior will impact their livelihood.

The latest CareerBuilder Survey revealed that over fifty percent of employers will screen current workers social media streams and have reprimanded or fired them for their online behavior breaching their social media policy.

Both colleges and businesses view you as an extension of their brand today – both offline and online.

“This is a human disaster, not a natural disaster,” she says Dr. Michele Borba.

“We caused it, we can turn it around. Empathy can be cultivated; we just have to work it into our agenda.” (And that doesn’t just apply to our children. There are empathy-boosting courses available for adults too. About 20 percent of employers in the United States, such as LinkedIn, Cisco Systems, and Ford Motor Company, have offered empathy training for managers, according to the Wall Street Journal.

There is a civility crisis happening and it’s up to us to turn it around. According to Civility in America survey, sixty-six percent of Americans have asked their friends to be kind to others online.

How are you promoting civility in your cyberspace?