How do we know when we have reached an all time low in shaming? When we have to attack the most defenseless. Toddlers and babies.

It’s truly the rise of SHAME NATION as we watch people insult and shame other people’s children.

The latest headline of a 10 month old boy, Landon, when his mother posted his photo on Facebook innocently, and as we know typically happens — someone quickly copied it and created an Internet meme title “Stuff Curry.”  This obviously was named after an NBA player, Stephen Curry — but for Landon’s size. Quickly the Internet meme went viral and response of fat and obesity comments came pouring in.

It’s really disturbing that we live in a culture that adults will shame children without a second thought. I have to wonder, would it be the same if it was their child?

Jessica Benton, Landon’s mother, turned the table on this incident. In response,  she posted pictures of Landon dressed in anti-bullying messages and then Landon went from a target of shame to a social media star. 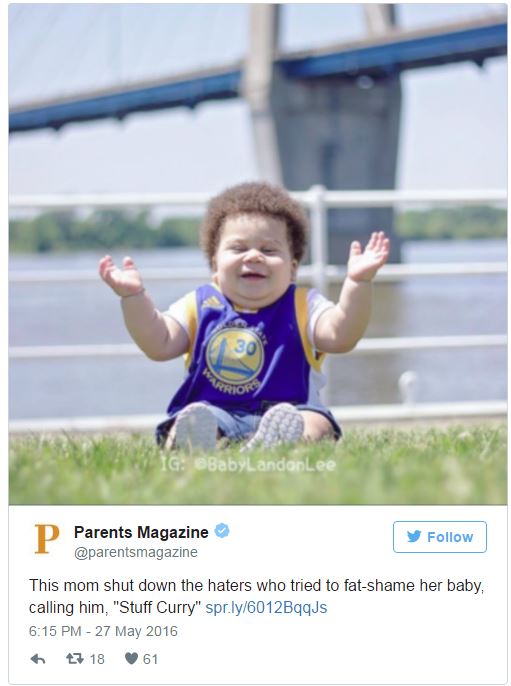 Once again, it’s always nice to see celebrities bring attention to the trolls and mean people that believe it’s okay to use their keystrokes as cyber-bullets. Jimmy Kimmel also does this with Mean Tweets. Celebrities are the target of these trolls too, but remember, they have feelings just like we all do. I’m grateful they are able to address them in ways the average people typically can’t.