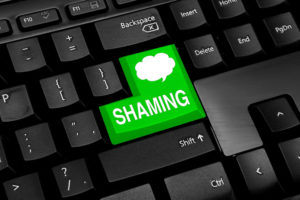 In today’s digital driven culture, it’s not only average people that are torn down by their peers — celebrities are regularly ripe targets.

You may think because they have publicists or deep financial pockets they aren’t affected by the online banter of fat shaming, face shaming, body shaming and more — but in reality they feel the same emotional pain you do.

We must applaud pop-stars like Kesha for speaking out against cyberbullying and trolls that are attacking her online.

“Bullying someone who has struggled publicly with body issues is pretty mean. Thank god I’m in a place in my life where I feel empowered to address your nasty comments instead of letting them destroy me. So. On behalf of anyone anywhere who struggles with body image, STOP IT. My body is not your business,” she wrote.

She’s not the only celebrity to address trolling.

It wasn’t long ago when Amy Schumer was their body-shaming-bait. As she was vacationing in Hawaii, she posted a photo of herself in her one piece bathing suit on Instagram — with a message:

“I meant to write ‘good morning trolls” Schumer wrote under her photo,  “I hope you find some joy in your lives today in a human interaction and not just in writing unkind things to a stranger you’ve never met who triggers something in you that makes you feel powerless and alone.”  She ended it with an up-swing… “This is how I look. I feel happy. I think I look strong and healthy and also like miss trunchbull from Matilda. Kisses!“

Another celebrity that has used her platform to help millions is Demi Lovato. She has not only been body shamed, she has been bullied for many years of her life. She is someone that is working hard everyday to not only succeed for herself, but is a voice of compassion and support to help others overcome the darkness of online harassment and bullying.

“Learn to lurrrrrvveee yerrrrr currrrrvveees. I actually used to hate them… But then a special someone helped me learn how to love them… And he sure loves them…. #squats #COOLFORTHESUMMER.”

As Ellen DeGeneres reminds everyone on a daily basis, be kind to each other. We’ll add, that includes online — as well as offline.

On July 12th, 2016, Jennifer Aniston, who isn’t on social media, took to her pen and wrote an empowering essay for Huffington Post;

For the record, I am not pregnant. What I am is fed up. I’m fed up with the sport-like scrutiny and body shaming that occurs daily under the guise of “journalism,” the “First Amendment” and “celebrity news.”

It was in the summer of 2014 when Aniston told reporters that she was becoming a social hermit since she feared going out due to the internet bullying.

Ariel Winter, Modern Family actress, was able to use her voice, July 13th, 2016 on The Talk, as she discussed confronting her cyber-Trolls.

“I mean, people say everything on the face of the planet to me about everything I do. And it just really, it can destroy a person and I also think it’s disgusting what people spend their time on,” Ariel said on the show. “You’re sitting behind a computer, you don’t have the guts to say it to my face, but you have the time and energy to shame and hurt somebody on the computer, and that just show how little respect you have for other people and how people spend their time.”

It’s sad that we live in a time where it’s become acceptable to hurt and harm people with words — without any consideration that they are human too. When will adults — grow up?