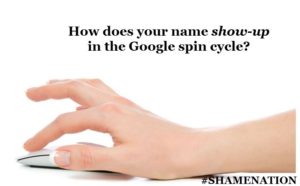 It all started back in 2003 when I became a target of an online slime campaign. The story is so twisted (as with most cyber-harassment cases), that to explain it would take a book — and it literally took two books to describe.

I sat in my office and I received a call from a very good friend and colleague, who was also a psychologist. He said to me, “Do you know what Google is saying about you?“

I paused for a moment, since I had to think — does Google now have a voice, does it speak — remember this was 2003, before Facebook Live or any type of LiveStreaming for that matter. Since I was at my desk, I did the dreaded Google search that literally was the beginning of my nightmare. I’m sure many of you reading this know that feeling when your heart falls to the pit of your stomach and all the blood goes rushing out of you — as if you have actually died. If you’ve heard me speak – I tell this story often. It’s a day that literally changed my life. That moment you know nothing will ever be the same again.

Ironically, I was curious why my phones had just about stopped ringing — and parent requests had dwindled down to nearly a handful, when we were used to getting dozens daily.

The psychologist had called to tell me he had to temporarily stop referring clients to me since it was the fifth one that has complained about what they had found about me online.

I don’t blame them. What they found was horrifying. Especially if you were going to contact me for information on schools and programs for your teenager — and when you asked the internet about me, you quickly find out the most malicious things. Still today I have a hard time typing them out. You can read all about it in my second book – GOOGLE BOMB.

The fact is – no one takes the time to determine what is internet fiction verse internet fact.

Your online reputation can literally determine your college, your career and even your potential relationships. How your name spins out in the Google rinse cycle says a lot to the person that is hitting that enter button.

Did you know according to a 2015 CareerBuilder survey found that employers were 35% less likely to interview candidates they couldn’t find online. If you have zero online presence, an employer sometimes assumes you are either attempting to hide your history, maybe you have an alias or possibly you are not tech savvy. Of course being digital super-star is not always job requirement, but most employers like to see some level of computer experience.

Have you been a victim of online shaming, slander or defamation? Has it prevented you from getting a job? Have you lost a job due to online issues?