On the heels of the Obama Foundation issuing a call for digital citizenship, while we witness a steady decline of online civility, PEW Research Center released their latest survey regarding Online Harassment as it pertains to adults.

It starts at the top.

From parents to teachers to sports figures to celebrities and even politicians…. adults are supposed to be the role models, however what happens to them when they become the victim?

Make no mistake about it, adults can also be the ones acting like children online, but they are not immune to being harassed, stalked or bullied. As someone that nearly had their life destroyed by vicious keystrokes, I understand firsthand how adult trolls can ruin people’s lives.

According to the research by PEW, a majority of Americans (62%) view online harassment as a major problem. Forty-one percent (41%) of Americans have been personally subjected to harassing behavior online, and an even larger share (66%) has witnessed these behaviors directed at others. 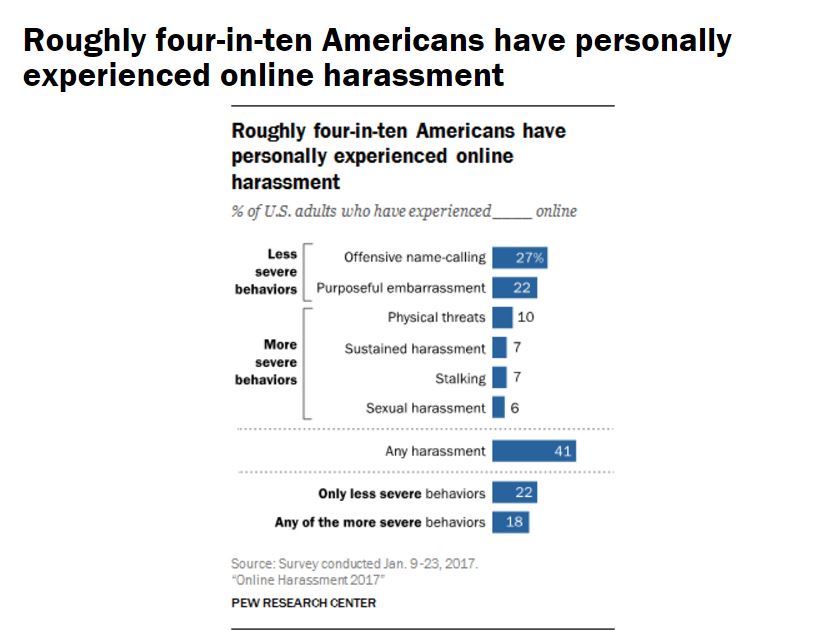 Speaking on the adult side of sending sexual content, some consider this their form of flirting. Maybe it’s spicing up their marriage or part of their trusted relationship, but do they fully comprehend the risks? A cell phone being left behind on train or in a gym locker room or even being hacked. Or you can be part of the seven percent of people that will share your images without your consent.

Sexting, although some believe it’s normal in today’s tech times, with divorce rates climbing and break-ups as an unknown, can have serious consequences. Here’s what some people had to say in the PEW Research survey:

“Someone shared explicit photos of a friend of mine without her consent.”

“Someone posted explicit pictures of me without my permission on a ‘revenge girlfriend’ website.”

On the bright side.

We have read many headlines of youth taking their lives usually associated with cyberbullying, however rarely read about adult suicide. Does this mean it’s not happening?

I don’t have the answer to that, however what is clear is that online harassment has offline consequences to our mental health.

PEW Research found that for those who experience online harassment directly, these encounters can have profound real-world consequences, ranging from mental or emotional stress to reputational damage or even fear for one’s personal safety. At the same time, harassment does not have to be experienced directly to leave an impact.

Over a decade ago when I fell prey to a mob of trolls, there wasn’t an awareness of exactly how cyberbullying and online reputation can impact someone’s life. Today we know the risks and the dangers it can lead to – for all ages. From kids to teens to young people to adults. No one is immune to being harmed by malicious cyber-bullets.

We often read about where tweens and teens can reach out to get help when they are facing online harm, but rarely we talk about the grown-ups. What about us?

From Cyber Civil Rights Initiative, to Heart Mob to Online SOS Network to Without My Consent, there are caring people here to help you. Adults helping adults. They understand that some grown-ups haven’t grown-up yet.