It’s Just Not Funny: Celebrities Have Feelings Too

When I first wrote my proposal for SHAME NATION, one of the quotes that stuck with me was when Iggy Izalea Tweeted;

“The Internet is the ugliest reflection of man kind there is.”

Then I watched as social media pick apart one of my favorite actress’s – Renee Zellweger, literally creating polls online about her face?! I thought to myself, is this for real?  How can people be so cruel.

Just because these people are celebrities, it doesn’t mean they aren’t human, and don’t have feelings.  Now that Renee has a new movie coming out, one critic, Owen Gleiberman, refueled the her new look in his Variety piece.  The title of his article was an insult in my opinion, that I won’t even put it here. Interestingly, if you read the over 200+ comments, the majority are against Gleiberman’s opinion of Renee. Which might be why this didn’t go as viral as we see it goes many times.  Actress Rose McGowan wrote with a powerful piece in the Hollywood Reporter that shot-back at Gleiberman.

Renee Zellweger is a human being, with feelings, with a life, with love and with triumphs and struggles, just like the rest of us. How dare you use her as a punching bag in your mistaken attempt to make a mark at your new job. How dare you bully a woman who has done nothing but try to entertain people like you. Her crime, according to you, is growing older in a way you don’t approve of. Who are you to approve of anything? What you are doing is vile, damaging, stupid and cruel. It also reeks of status quo white-male privilege. So assured are you in your place in the firmament that is Hollywood, you felt it was OK to do this. And your editors at Variety felt this was more than OK to run.

One of my other favorites in the celebrity world is Taylor Swift. She is someone that has been a role model for youth and realizes that what she does both offline and online matters. It seems the trolls just can’t handle her image – need to always find a way to attempt to belittle her (which in reality could never happen), but the following behavior is absolutely anything but funny.

While there was important news breaking, Twitter was abuzz with a discussion about ham sandwich’s and Taylor’s private parts. 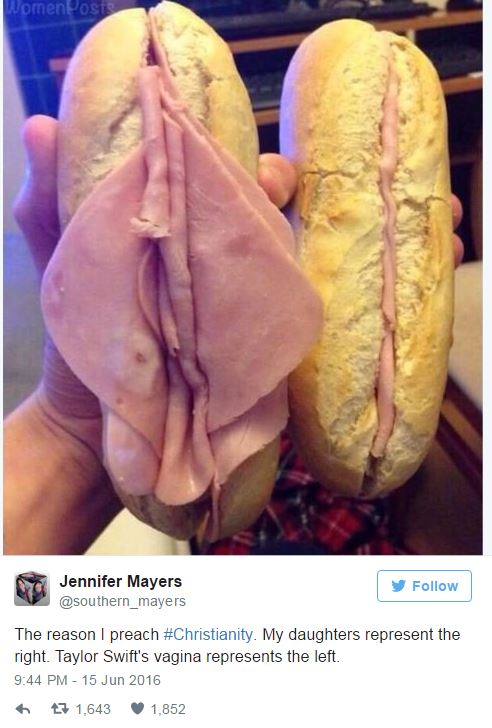 I’m confident that Taylor probably didn’t even follow it, but the fact is, her followers probably did see it. I relate it to when parents are fat-shamed or slut-shamed, they are hurt about it, but they are really concerned about what their kids are thinking when they read about it online. It’s simply deplorable behavior that doesn’t help anyone.

Taylor is likely disgusted with Internet trolls too, but she rises above it. It doens’t mean, like Renee, she doesn’t have feelings too. As a celebrity she needs to keep pushing through it publicly.