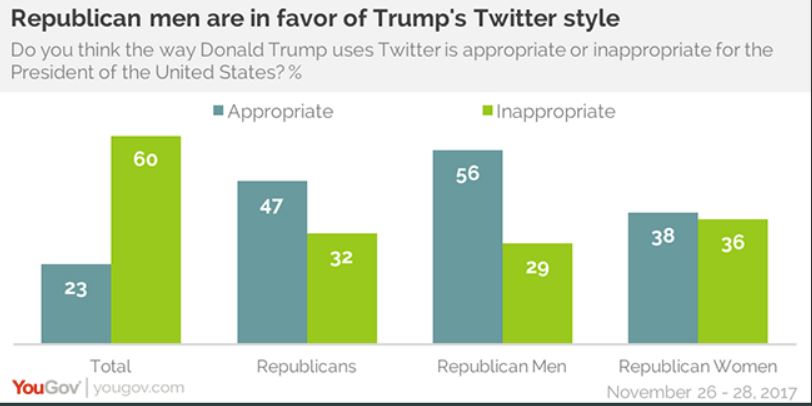 For the average person we’re all a click away from digital disgrace, however some people seem to be immune to online shame or cyber-blunders.

In a recent Economist/YouGov Poll, fewer than one in four Americans find the leader of our land’s Twitter behavior appropriate for a President, while six in ten do not. President Trump continues to use Twitter as a means of announcing policy, celebrating holidays and – most notably – attacking his opponents. It’s a practice that many in the latest Economist/YouGov Poll find troublesome.

With the recent release of my latest book, Shame Nation: The Global Epidemic of Online Hate, I’ve been asked numerous times my opinion on POTUS’s behavior.

The answer, I believe is a non-answer. I don’t know anyone that would believe there is ever a need for cruelty towards others, mocking or treating people with blatant disrespect — especially when it’s coming from a person in authority such as the president of the United States of America.

The real concern is for the adults that are perpetuating this digital discourse. Parents (and other adults) that are re-tweeting it, condoning it and approving (liking) it. I’m truly worried when I watch grown-ups spread this type of online hate. Most have sadly accepted that POTUS is not going to change his tweeting behavior, however it doesn’t mean we have to endorse it or respond to it.

In the YouGov survey 60 percent of American adults believe that President Trump uses Twitter inappropriately for a person in his position. Negative feelings about the President’s tweeting pattern usually increase when he uses Twitter to attack. Last month he engaged in a Twitter war with the father of one of basketball players who had been arrested in China about credit he should receive.

In theYouGov Tweetindex, two of those tweets rank among the ten lowest-rated ten tweets of the more than 1,700 tweets it has asked the public to evaluate since February 4. Only the tweets attacking Mark Cuban, Joe Scarborough and Mika Brzezinski, former FBI Director James Comey, and Arnold Schwarzenegger were disliked more.

Talking to your kids

In this age of digital literacy, having role-models is important. Parents need to lead by example and explain to their children (kids and teens alike) that cruelty to others both offline and online is never acceptable. When we witness people in authority or even celebrities being foolish or disrespectful online, these are opportunities for parents to discuss with their kids how it’s inappropriate behavior.

Teach your children to be upstanders. Instead of ignoring their friends being teased or cyber-humiliated, show them they have the tools to stop, block and tell someone to help curb online hate.

Conduct: Check-in with yourself before you post. Remember there’s a person on the other-side of the screen. Never put a temporary emotion on the permanent Internet.

Content: Is what you’re about to post going to embarrass you or someone else? Remember 15 minute of humor isn’t worth a lifetime of humiliation.

Caring: Always post with empathy and compassion towards others. With this, it’s impossible to be cruel. When in doubt, you can always click-out.