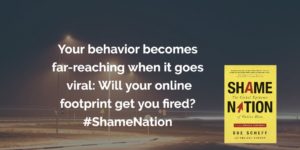 Who didn’t love Candid Camera? Catching people off-guard when they said and did [sometimes] the most ridiculous things, that they probably wouldn’t have done if they thought the world was watching.

Today, whether you are walking down the streets of New York City or taking a train to D.C. or maybe you are waiting at an airport as your flight is canceled and you need to be at your destination…. no one can escape the glare of someone’s smartphone or a video camera that is providing surveillance. We are all a click away from digital disgrace – whether we want to admit it or not.

We witnessed how Dani Mathers quickly shot to infamy with her SnapChat slip-up that went viral, costing her not only her job, but landed her in court facing criminal charges. Kathy Griffin thought she was being humorous with her horrific post of the leader of our country while journalist Terry Frei sent out a raciest Tweet — both quickly learned that these twisted Tweets and mis-posts came with a price. Frei found himself unemployed and Griffin lost many sponsors and her gig on CNN with Anderson Cooper.

All these people apologized, but like many situations, especially when it’s online, it’s also too late. The apology is a must, however so is the dismissal from the job. Most employers don’t want that liability. Remember, your online persona is a reflection of who you are offline.

Being smart doesn’t stop you from making stupid posts either.

The best and the brightest, which can describe many Harvard students, isn’t always applicable as we saw when ten of their recent applicants had their acceptances revoked due to poor judgment with distasteful posts.

Now we have another reporter, Colleen Campbell,  that went on a tirade outside a club in Philadelphia. Her behavior is now going to be her online legacy that will be hard not to miss when you search her online. No matter what her excuse is, and she did apologize, the video will forever speak for itself.

With more and more people quickly willing to snap, click and video your less than flattering moments, we all have to remember, gone are the Candid Camera days – today we are all facing a time when we could all potentially become Internet infamous.