Online Behavior Is A Reflection of Offline Character 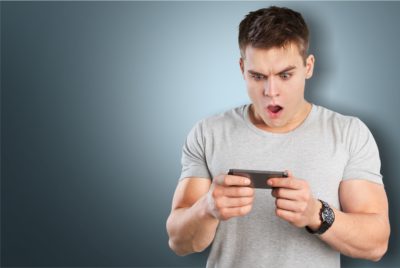 In a society where people are quick to post and think later, they seem to forget that the Internet lives forever.

In Chapter 3 of Shame Nation book, “I Can’t Believe They Posted That” we discuss many digital blunders that average people make on a daily basis. In many instances, a bit of common sense can go a long way.

The recent tragedy of the mass school shooting in Parkland, Florida has no shortage of people acting out online without thinking. We all understand that tempers can flare, but when you post emotions online the permanent Internet, they live forever (even after the storm).

We’ve also witnessed a smear campaign against the students, calling them crisis actors.

It’s a very emotional time, however not a time to judge each other or be cruel to one another — especially on social media.

The feed below was on the CBS Sunday Morning news feed recently, two grown adults throwing insults at each other. This is a public (global) forum which kids and everyone reads. The grown-ups are supposed to be role-models, however with behavior like this, it leaves a green-light for their own children (and potentially others)  to act the same way.

Make no mistake about it, it’s not only about leading by example — from employers to colleges to potential relationships, these people’s names are now going to be referenced with this sort of unsavory character at a time of crisis in our country.

Your online behavior is a direct reflection of your offline character. 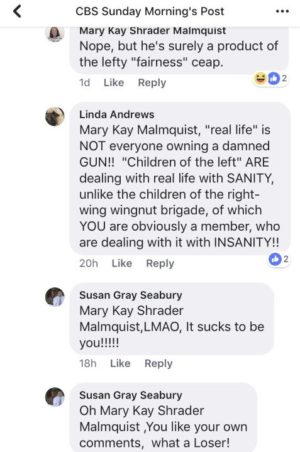 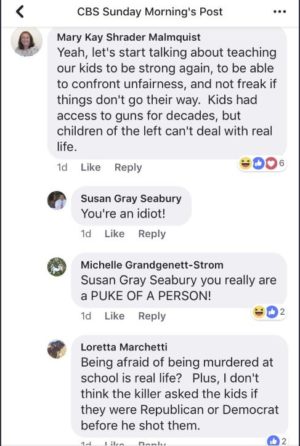