We often think of violence offline when it’s on the news, in the media – maybe sadly in your town — however with the growing cyber-world, the harsh reality is that online violence is quickly effecting many people of all ages.

UNICEF released their report Perils and Possibilities: Growing up online, based on an international opinion poll of more than 10,000 18-year-olds from 25 countries, revealed young people’s perspectives on the risks they face growing up in an increasingly connected world. The new report  that shows online violence and exploitation is a reality in the lives of children worldwide, but many are not provided with resources and knowledge to protect themselves.

The majority of teen respondents think that children and adolescents are in danger of being sexually abused or taken advantage of online. Only half of all 18-year-old respondents strongly believe they have learned to deal with online sexual harassment. 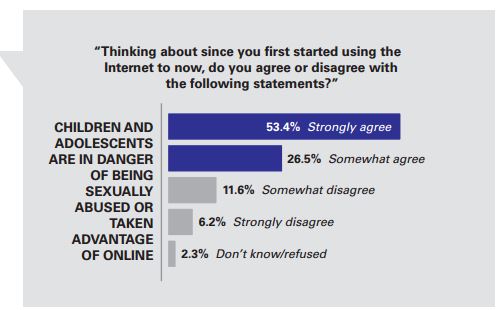 At 18 years-old, it’s imperative that the other half learn how to handle online harassment and abuse. Educating our youth starting younger with digital skills and online safety empowerment should be a requirement whether it’s in school or with parents talking about this frequently.

With the growing number of online predators as well as the child pornography business being a huge factor online — we need to help our kids know that it’s okay to click-out when they’re in doubt.

Despite recognition that dangers exist online, nearly nine out of 10 adolescents think they have learned how to protect themselves on social media and know how to avoid dangerous situations while using the Internet. This is good news.

What about those that don’t?

One of the most important things for teens and all ages to know, especially if they are being harassed or have been threatened online is to reach out and tell someone.

You are never alone, you must either tell your parent, teacher or as the study reveals, 54% of people are likely to tell a friend. The point is – you must tell someone.

Be a friend — be a digital role model or mentor for someone. The internet is a wonderful world of opportunities, but with humans behind the keyboards, we never know if there is a bad egg in the bunch.

Take time to read the study – and learn more about online safety. 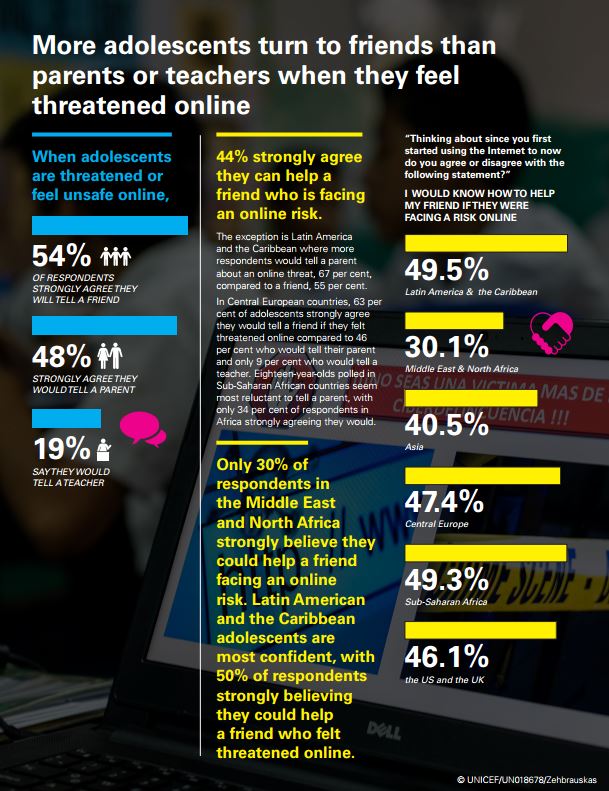 About the WePROTECT Global Alliance

The WePROTECT Global Alliance is dedicated to ending the sexual exploitation of children online through national and global action. Its vision is to identify and safeguard more victims, apprehend more perpetrators and create and internet free from this crime. The WeProtect Global Alliance is comprised of governments, companies and civil society organizations signed up to the commitments made at the WePROTECT Children Online summits in London (2014) and Abu Dhabi (2015) and the members of the Global Alliance Against Child Sexual Abuse Online.

UNICEF promotes the rights and wellbeing of every child, in everything we do. Together with our partners, we work in 190 countries and territories to translate that commitment into practical action, focusing special effort on reaching the most vulnerable and excluded children, to the benefit of all children, everywhere.