Shame Nation: The Global Epidemic of Online Hate. Sourcebooks. Oct. 2017. 332p. illus. notes. index. ISBN 9781492648994. $25.99. SOC SCI
Shame Nation is primarily a self-help book for those who are facing an Internet scandal, or who are living through an online shaming campaign. The last few chapters include helpful hints and online resources for avoiding and dealing with scandals. The real interest here comes from the stories of others who have brought down scandal upon themselves. Cyberadvocate Scheff and Schorr (Goy Crazy) include story after story featuring trolls, sex-related embarrassment, mistakes caught on tape, swatting, and fat shaming. It may well make the reader paranoid about the reach and power of Internet culture, but the tales are shamefully fascinating. The book does not dwell on the psychological or sociological aspects of trolling or shaming, emphasizing practical advice instead. With a foreword by Monica Lewinsky, this would be a good read for anyone who enjoyed Jon Ronson’s So You’ve Been Publicly Shamed.

Verdict A fun and scary collection of Internet wrongdoings, with some helpful advice on how to avoid them.—Jessica Spears, Brooklyn PL.

This is a welcome and timely guide to practical Internet use. Scheff, a parents’ advocate and Internet safety activist, suffered from an anonymous smear campaign and wrote this book with journalist Schorr to advise the many others who have experienced or fear similar attacks. From “sextortion” to cyber humiliation, Scheff explains how shame happens, how to defend yourself online, how to weather the storm, and how to recover from attacks on your reputation. Like most social problems, solutions and remedies arise through experience and time. Scheff details many of the organizations and companies that have been created to combat the scourge of shame online while providing many case studies, stories of survival, and campaigns of support There is a chapter on trolls, and how to deal with them, but little specifically dealing with the partisan political trolls poisoning our democracy. Parents will find the book’s advice useful in protecting their children from danger as they explore online, as will anyone who has made a hasty comment or tweet and lived to regret it. Shame Nation is a strong addition to any collection. – Booklist

“Nearly every day, there is another story in the news of someone who has been harassed, bullied, or shamed on the internet—and the results of this online hate can be devastating. Sue Scheff, a parent advocate and internet safety expert, and Melissa Schorr, a journalist and young-adult author, tackle the digital epidemic of cyber-shaming in Shame Nation.

The stories of cyber harassment presented in Shame Nation are harrowing and often familiar. They include mean mom groups, parent and teacher shaming, sexting scandals. The authors demonstrate that no one is immune to the reach of the internet. A single tweet or Facebook post can change, or even ruin, someone’s life.

It’s no secret that sometimes social media causes stress in teenagers. However, studies show that social media causes the most distress to middle school social media users. According to a study commissioned by CNN called Being Thirteen, “Forty-two percent reported having a serious conflict with someone online at least monthly,” says Robert Faris, Ph.D., a sociologist at the University of California Davis. Faris, who worked with CNN on the study says, “The majority of them said it was with friends. And we’re not talking about Facebook friends. We’re talking about close friends.”

“Shame Nation is a terrific parenting resource, one that combines real-life cautionary tales with practical solutions for every scenario.” – Your Teen Magazine

SHAME NATION talks about many incidences of bad behavior online. Some occurred on a large scale, some on a small scale. Some involve famous people, others people who could be your next-door neighbor. The types of behavior are pretty broad in scope – trolling, abusive memes, online stalking, extortion, revenge porn, online harassment, etc. Scheff discusses the subjects in detail, with tips on reputation management, how to be safe online, how to recognize and deal with online harassment when it happens to you, and the various forms it can take. Sometimes books like these can be preachy or laughably out of date, but SHAME NATION was neither. If anything, Scheff shows just how “gray” the internet is when it comes to the mob mentality of vigilante justice/injustice, and how quickly witch hunts can develop. 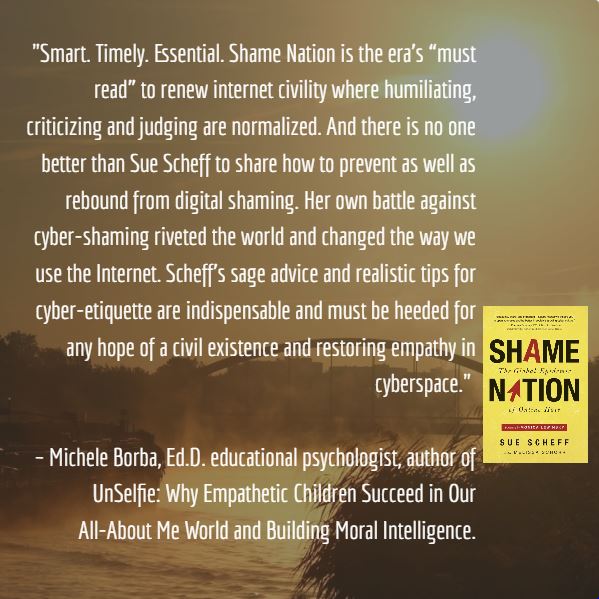 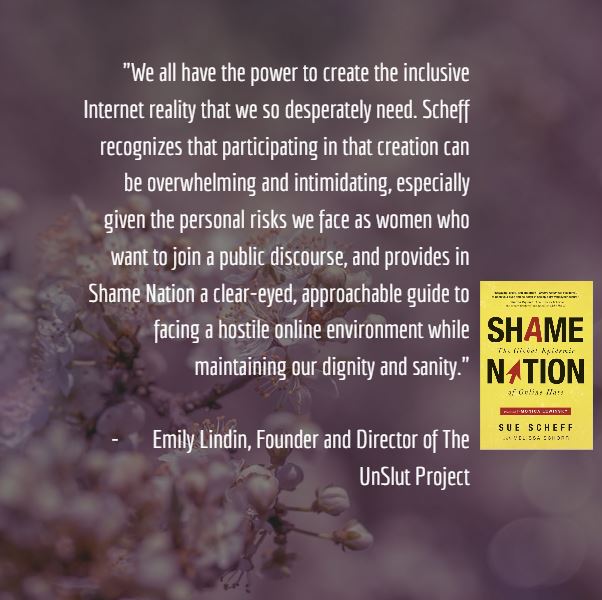 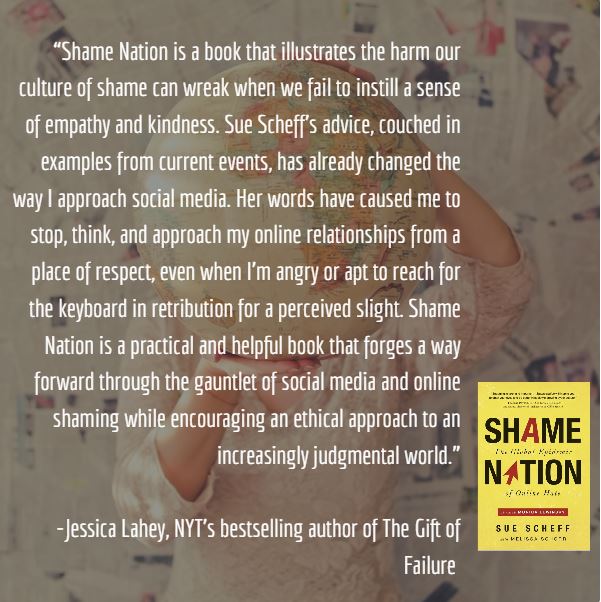 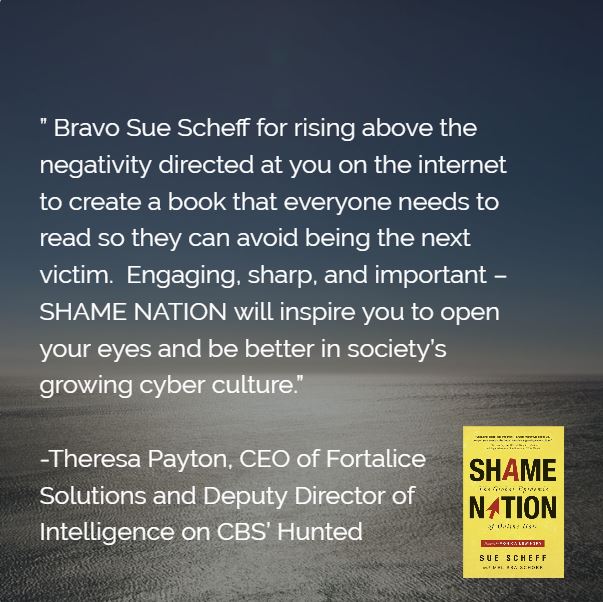 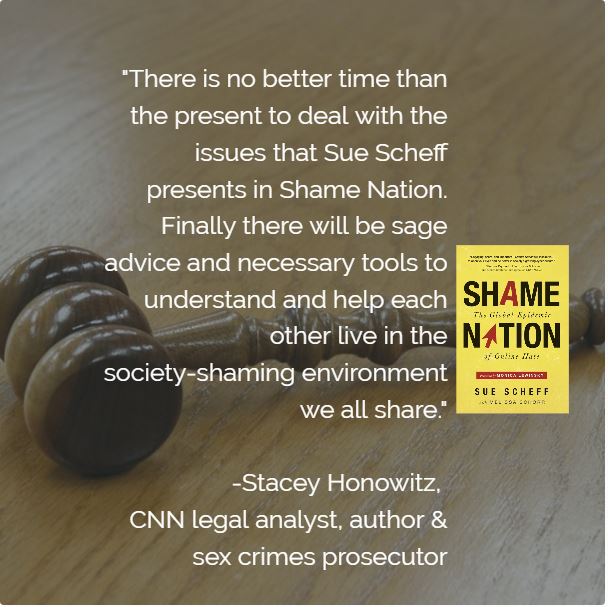 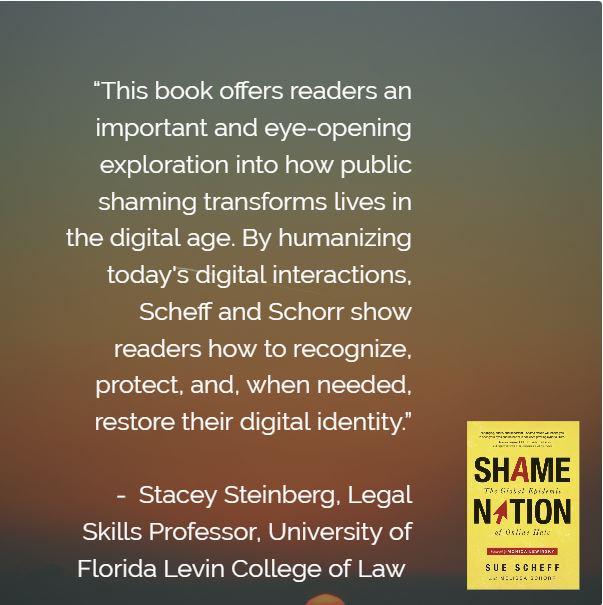 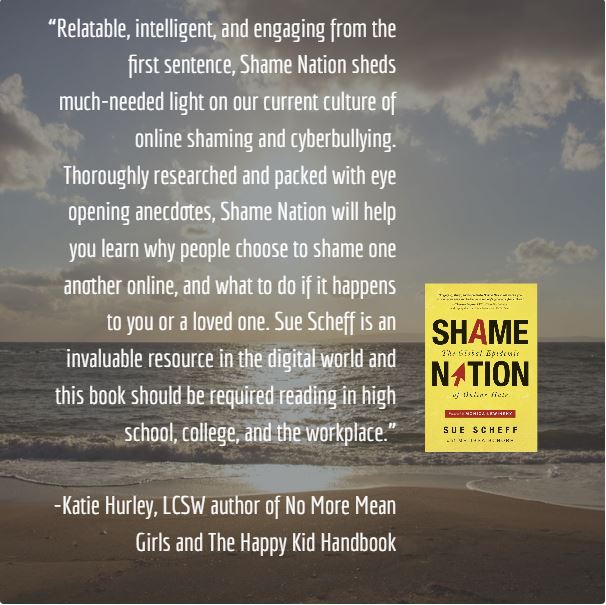 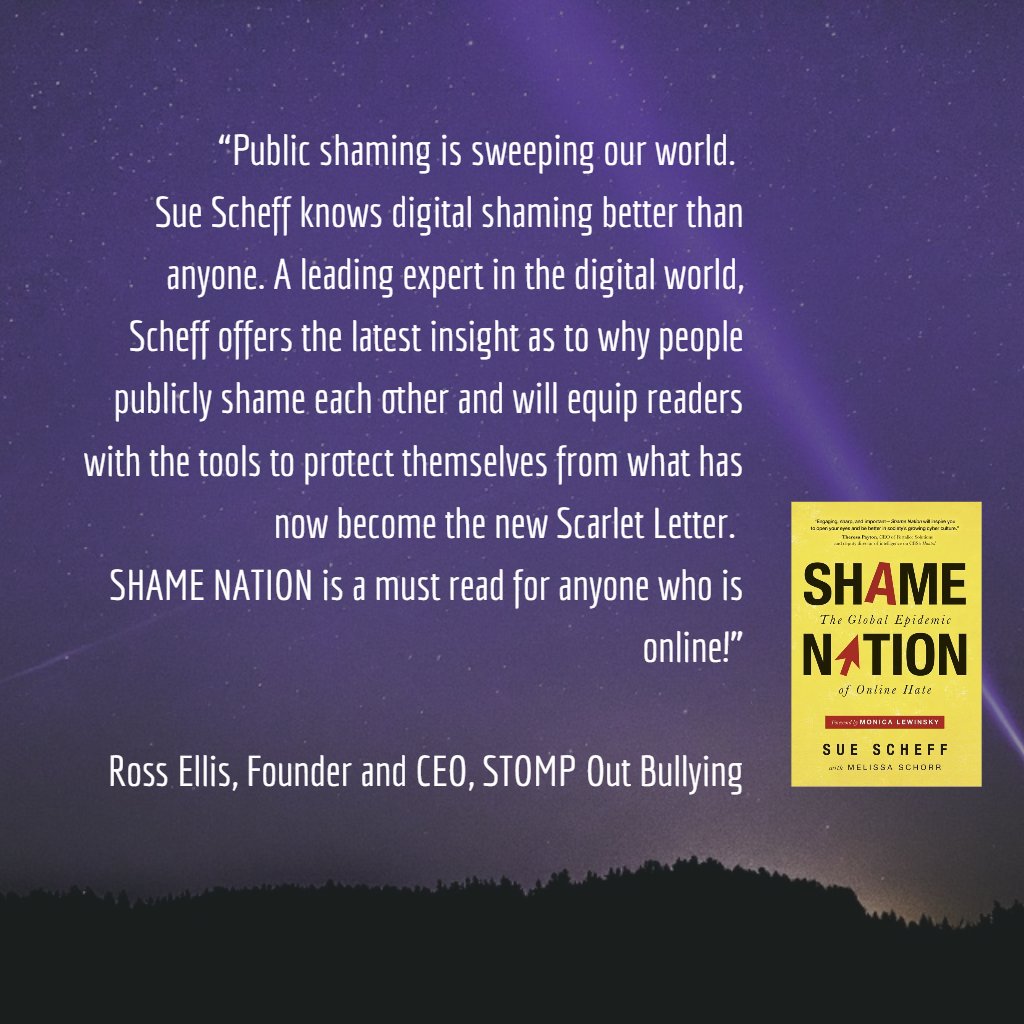 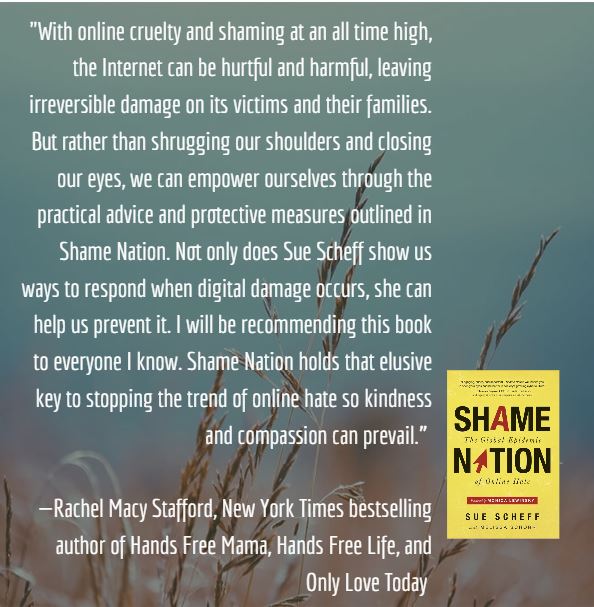 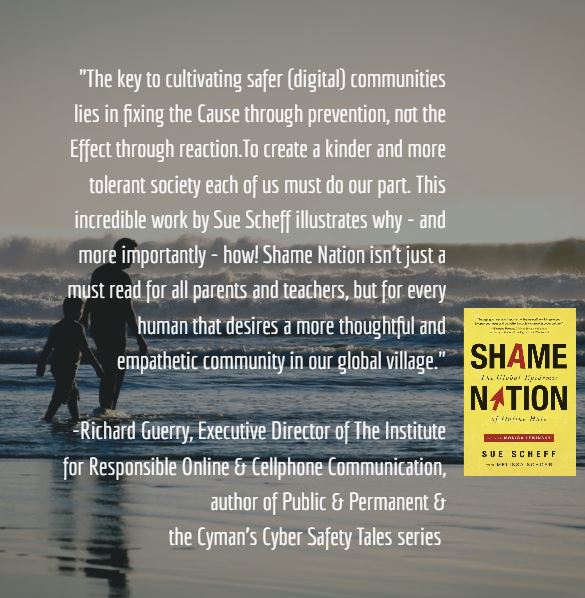 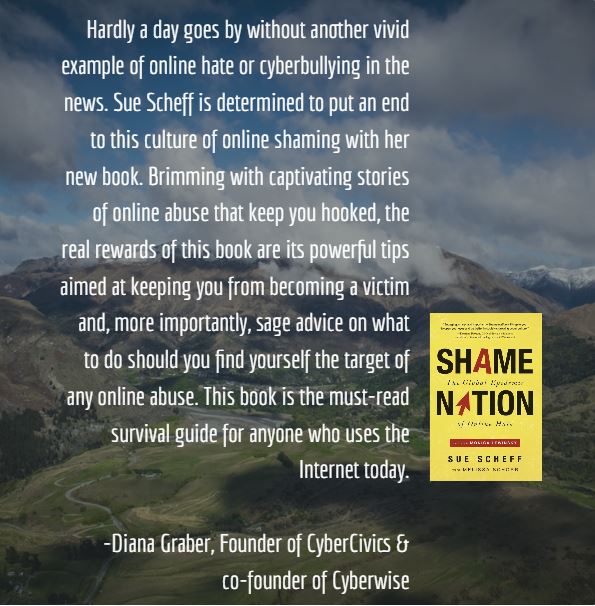 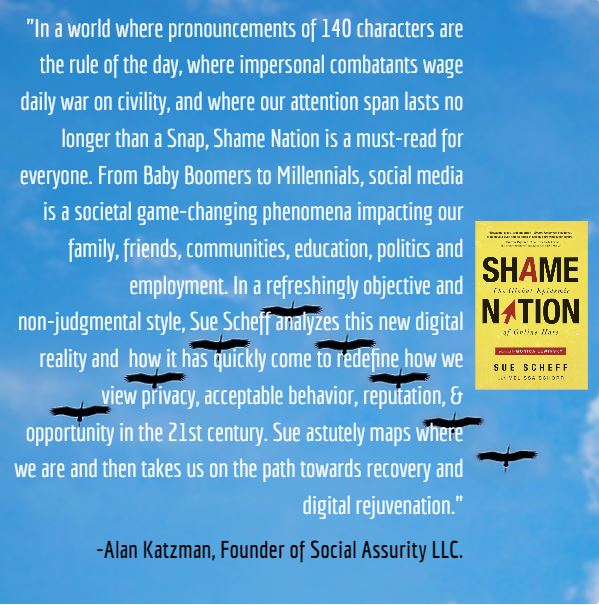 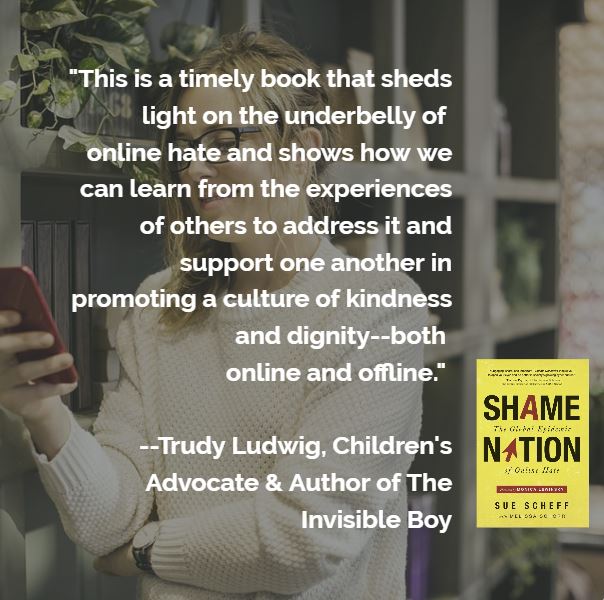 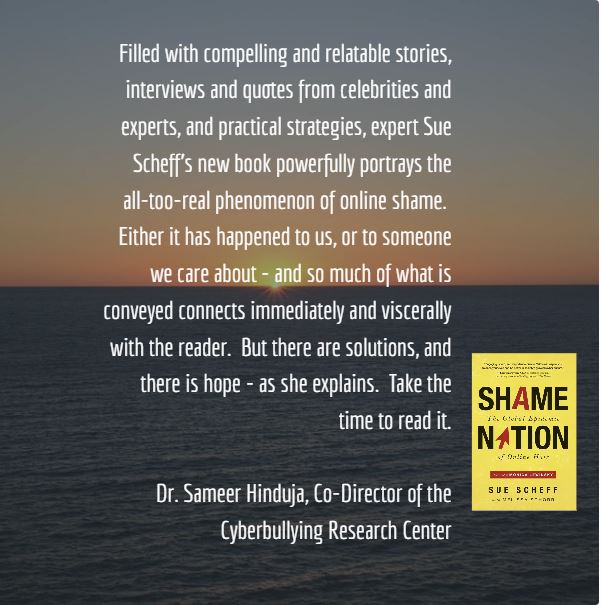