Stand Up Against Online Hate and Cyberbullying 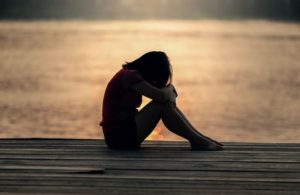 With the headlines screaming of horrific acts of bullying and cyberbullying that can push kids to their death, then we see celebrities and professional athletes taking a stand against this hate, I applaud them and feel some relief.

These public figures are victims too, they bleed the same as the average person, they have feelings as we do too. So when trolls and people believe they are spitting out cruel comments to them, realize there is a human on the other side of the screen. Just because they are famous doesn’t mean it doesn’t hurt them.

We understand they may have publicists and social media teams there for them, however to say it doesn’t get to your psyche every now and then wouldn’t be human.

Kenneth Suttner was only 17 years-old, but had been verbally tortured enough when he decided it was time to end his misery by suicide. According to the Washington Post, not only did his school fail to protect him, his boss at his place of employment, Harley Branham would humiliate him regularly. Allison Bennett, a former co-worker, testified that Branham constantly ridiculed him. She made him lie prostrate on his stomach while cleaning the fast food restaurant’s floor by hand. Once, she threw a cheeseburger at Suttner because he made it incorrectly, Bennett said. (Branham said this was all meant, and taken by Suttner, in jest.)

Branham is now charged with involuntary manslaughter. Maybe if more people were held accountable for their actions we would see a decrease in this cruel behavior.

Cyberbullying and online hate is a global epidemic.

In Ontario Canada, Sandra Fox is sharing the hate-filled social media messages her 12 year-old daughter, Chantel received the day she took her own life. 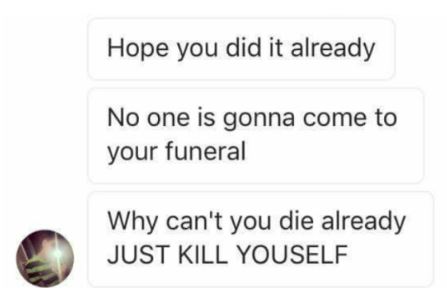 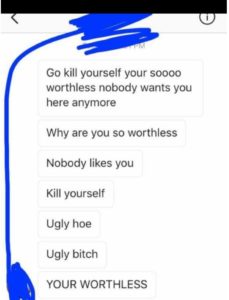 Chantel’s suicide was a few days after her 12 year-old friend, Jolynn Winter also took her own life. According to CBC News, several other girls from the community remain on suicide watch and at least two of them have also received messages encouraging them to kill themselves.

These cold chilling messages remind me of others we have heard in the past, which is really disturbing since it means we aren’t getting through to all kids yet — this cruelty is completely unacceptable and is a wake-up call to this community, school and parents as well as everyone across the globe. We can’t allow these headlines or deaths to go in vain. Sit your kids down today — talk to them about awareness, prevention and education about what to do when they witness online abuse and hate. Today there are many resources both online and off for everyone.

Talk to them about about appropriate sharing on social media. There was a report from UCLA in 2016 that said that people that overshared were less likely to have others come to their rescue online. Especially when you think of teens that are constantly seeking self-approval and acceptance through their LIKEs and sharing status, it’s likely their cyber-friends won’t be there when they need them most, if they become a victim of harassment. It’s most important that your child knows they have to be able to tell an adult — talking about this is crucial. Sometimes it won’t be the parent, for a variety of reasons, and let them know it’s okay, but they need to tell someone. No one can go through this alone.

“Show compassion in the face of hate….” – Danica Patrick

Professional athletes, celebrities and public figures take the hits too, but they continue to come together to give a voice to combat the online hate — I applaud them. They don’t have to do this, and for the average person, it can be a struggle as they are trying to put their life back together emotionally and financially. It’s comforting to know that people understand your pain, even those that are famous — that are willing to be your voice when you are suffering or maybe silenced temporarily, they let you know you’re not alone.