Surviving the Incivility of Online Trolls 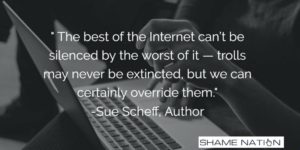 Anyone is capable of troll behavior, according to recent research from Stanford University and Cornell University. Wake-up on the wrong of bed, having a bad day or simply become irate over an online discussion and your fingers may go flying before your brain kicks in to bring it to a screeching halt.

Did you know according to a UCLA study, people that overshare online are less like to receive empathy or help from others if they are being harassed or abused digitally by trolls?

So humble braggers beware, if you’re constantly exaggerating (or oversharing) about your life events and suddenly find yourself as a target of online harassment, don’t be shocked if some of your friends aren’t stepping in to defend you.

Trolls have been with us since the dawn of time; there will always be some incivility

Pew Research Center and Elon University’s Imagining the Internet Center just released a new study that surveyed more than 1,500 technologists and scholars about the forces shaping the way people interact with one another online. They were asked the question:

In the next decade, will public discourse online become more or less shaped by bad actors, harassment, trolls, and an overall tone of griping, distrust, and disgust?

Of those surveyed, most believed (81 percent) that the tone of online discourse will either stay the same or get worse over the next decade.

Could it be the lack of gatekeepers and consequences that we repeatedly have witnessed with this behavior to escalate and continue online? One anonymous expert from the survey wrote, “Trolls now know that their methods are effective and carry only minimal chance of social stigma and essentially no other punishment. If Gamergate can harass and dox any woman with an opinion and experience no punishment as a result, how can things get better?”

How about a movement to teach people to behave?

Did you know that when a bystander decides to step in on behalf of a peer that is being harassed, 57 percent of the time the bullying is stopped within 10 seconds? Yet in most cases only 19 percent of bystanders will get involved in helping a friend or peer.

Educational psychologist and renown parenting and bullying prevention expert, Dr. Michele Borba, reveals in her twenty-fourth book, UnSelfie, Why Empathic Kids Succeed In Our All-About-Me World that teens today are 40 percent less emphatic than those of thirty years ago and narcissism are increased by 58 percent. She points out that as “empathy wanes, bullying can rise, and tormentors begin to see victims as “objects,” not human beings.”

Trendwatcher and keynote speaker, Marcel Bullinga wrote in the PEW survey, “Online we express hate and disgust we would never express offline, face-to-face. It seems that social control is lacking online. We do not confront our neighbours/children/friends with antisocial behaviour. The problem is not [only] anonymous bullying: many bullies have faces and are shameless, and they have communities that encourage bullying. And government subsidies stimulate them – the most frightening aspect of all. We will see the rise of the social robots, technological tools that can help us act as polite, decent social beings (like the REthink app). But more than that we need to go back to teaching and experiencing morals in business and education: back to behaving socially.”

A decade ago there was limited resources you could turn to if you were being abused or harassed online. Today, although we see an increase in trolling and online hate, we also have seen a rise in online support groups.

Yes, we are experiencing a time when cruelty seems to be at an all time high, but we also have a lot of positive organizations and people that are willing to help those that are being victimized. The best of the Internet can’t be silenced by the worst of it — trolls may never be extincted, but we can certainly override them.