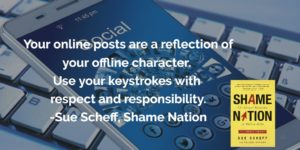 If we haven’t heard it once, we’ve heard it a hundred times – what you post today can/will haunt you tomorrow.

Last week the headlines were streaming with Kathy Griffin losing jobs and sponsors for her inappropriate posting, and reporter Terry Frei losing his journalist position at the Denver Post for his raciest Tweet — this week Harvard announced they have rescinded about ten student acceptances for posting obscene memes.

In the group, students sent each other memes and other images mocking sexual assault, the Holocaust, and the deaths of children, according to screenshots of the chat obtained by The Crimson. Some of the messages joked that abusing children was sexually arousing, while others had punchlines directed at specific ethnic or racial groups. One called the hypothetical hanging of a Mexican child “piñata time.”

In my upcoming book, Shame Nation, we discuss how your online persona can and will give people an idea of who you are offline in respect to your character and compassion for others. When you witness students acting like this, it’s very difficult to see that they have any empathy towards humanity or any type of moral code within themselves.

As one of our takeaways in the book is: “Being smart doesn’t save you from saying something stupid.”