The Havoc Over Leaked Emails

Embarrassing emails by the Democratic National Committee were released by Wikileaks just prior the DNC convention this week. As they debate who hacked them continues, their DNC Chairperson, Debbie Wasserman-Schultz was asked to resign since the emails exposed extreme bias discussions that favored one candidate (Clinton) over the other (Sanders). She was supposed to remain neutral to both — and it’s obvious in these emails, she was already planning Clinton’s victory since 2015 as well as other damaging emails that favored Clinton by her and other staff members.

As people will debate who hacked these emails (Wikileaks is only the messenger), the other important question that we all should be concerned about is, as adults, where was their digital etiquette? We teach our teens and children never to put things in emails or online that we don’t want to come back to haunt us, yet these adults believe they were invincible? Isn’t that what we say about kids?

It wasn’t long ago that we witnessed the Sony email hack and who can forget when the Ashley Madison site was hacked and the clients were exposed! Yes these adults actually believe that what they put in emails are safe/secure (or they don’t think at all) and when they sign up for websites — with their credit cards they won’t be discovered — until they are. To believe there is such a thing as privacy online, is very risky today. The fact is, like bad things happening to good people, you never believe this can happen to you — until it does. 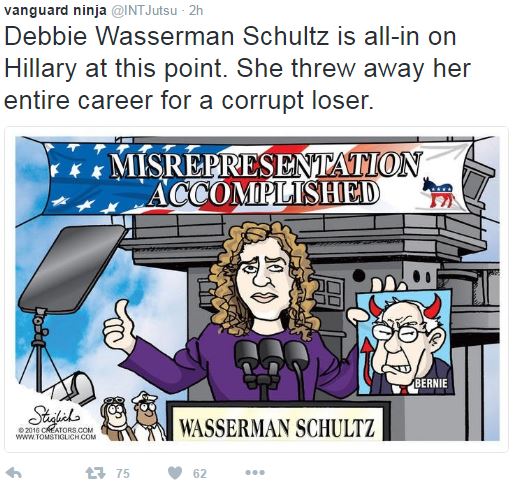 When you don’t implement online etiquette you risk making cyber-blunders that can cost you not only your job, but humiliation and embarrassment. As I read Debbie Wasserman-Schultz Facebook page, I’m confident she’s not feeling the “bern” at this time. Twitter is not being kind to her either — as people, again adults, are using their freedom of speech, to express their anger with her.

Will she continue to use her keypad without using sound digital judgment?

No one is condoning what is being done to her online, this is about having a teachable moment to everyone.

When we read about tragic events such as texting and driving, it a reminder, turn off your phone before you turn on the car.

As you read about these cyber-events, it should cause you pause before you are about to publicly post anything and especially send a sensitive email. Everything you do online has the distinct possibility of becoming public at any given time.

The other risks, as Debbie Wasserman-Schultz has experienced, is losing your job and becoming public ridicule. Not to mention some people have experienced their emails becoming exhibits in a court of law.

Let’s start immediately with using our keystrokes with consideration. If you wouldn’t send a post, a comment or an email to your grandmother — you may not want to send it at all.